I have updated this Ninja Birthday Party post the best I could. I wrote this post and took the pictures when I started my blog many years ago. That was before I knew anything about blogging, photography and even thought that someone would read the post. And, wouldn’t you know it, this is one of my top performing posts STILL on the blog! I wanted to make this post as best as I could without having to recreate the entire party. There is a lot of great ideas for a Ninja Birthday Party in this post and we saved so much money by doing the party the way we did so I am happy to keep sharing those ideas with you all!

When our son turned nine, he was crazy about LEGO Ninjago. Planning a Ninja Birthday Party back then was not easy. I searched and searched for ideas, but kept coming up empty-handed. That was both frustrating and exciting because I knew other people had to be searching for the same things and I had to get creative in coming up with Ninja Birthday Party ideas that wouldn’t cost a ton of money.

Not only was this party inexpensive, but it really wasn’t hard to put together. The first thing I did was plan for the decorations. I bought some white foam board and drew pictures of our son’s favorite LEGO Ninjago characters on them. I used a projector to help me with the outline and then colored them. The foam board was pretty big so I knew these would make a BIG impression at the party. 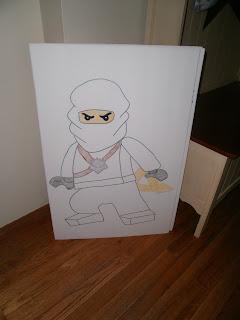 Then, we used a color printer and printed off some yellow “ninja eyes’ to add to different colored balloons. This was such a simple idea, but really brought the theme full circle. 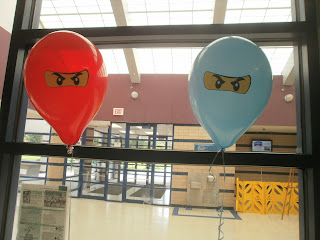 I also added the ninja eyes to the small, green take-home bags I bought bags for 25¢ at Toys R Us. If you buy smaller bags then you won’t have to fill them with a lot. BUT…. for a ninja birthday party, I had to get creative with “themed” toys for the kids to take home.

I went to The Dollar Tree to see what I could come up with. I brought our son with us because he knew everything there was to know about Ninjago so he would be able to help me with different ideas. The first thing we found were “jointed” snakes that we thought were perfect to act as the “Serpentines” from the Ninjago stories. There were four in a bag for $1 so it was a very inexpensive addition to the take-home bags. We also found bags of rubber snakes that were going to be more “Serpentines” in the bags. We grabbed swirly straws because I thought they looked like snakes and then I printed off some snakes I found online to add to the straws which made them even more “serpentine-like”. 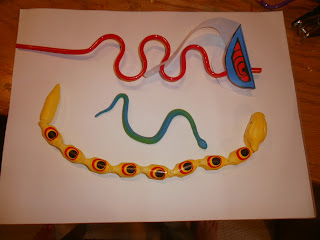 After The Dollar Tree, we stopped at Michaels. There, we found foam “discs” that we thought looked like Ninja Shurikens. SCORE!

To finish off the take-home bags, we wrapped Hersheys bars with green construction paper and glued the yellow eyes to the outside (I forgot to take a picture of those). When I was at Toys R Us picking up the green bags, there was an empty Ninjago display on the shelves. I asked the manager if I could have it and he said yes!

This was an easy thing to add to the table to hold the ninja water bottles we made. 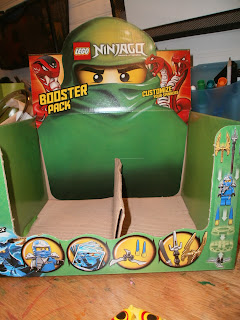 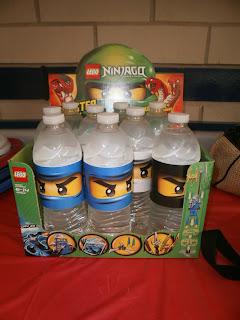 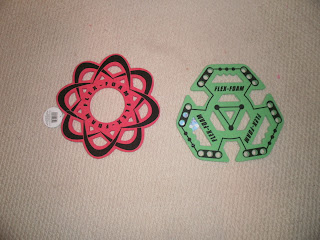 We made and printed off a “Happy Birthday” banner! We laminated it and hung it up in the party room at my husband’s work. 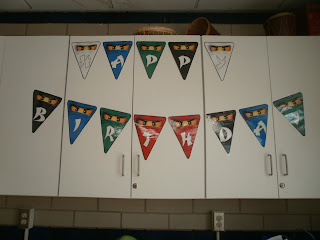 We also made laminated placemats for each of the guests that they could take home after the party. 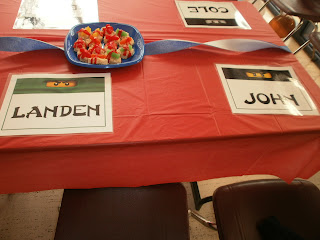 For ninja birthday party activities, we hired a karate instructor to show the boys some “ninja moves”. This was a huge success! They all enjoyed it! 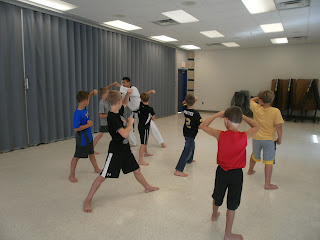 We also had a huge blow-up joust. The boys picked a Ninja character to be and “battled” each other on the joust. It was a safe and fun way to work out some of their “boy energy”. 🙂 {Affiliate links are used in this post. You can read my disclosure HERE.}

For the food, I kept it simple. I made “fushi” (fake sushi) which is rice krispie treats cut into oval shapes with a Sweedish Fish placed on top and wrapped with Fruit by the Foot Roll Ups. Easy Peasy!

Instead of a cake, I made simple cupcakes. I made chocolate and white cupcakes. I frosted some blue and some green. Then, I rolled out yellow fondant and cut small ovals out of it. I took a black writing frosting tube and created the black eyes on the fondant. Then, I placed them on top of the cupcakes. Viola – Ninja cupcakes. So easy! 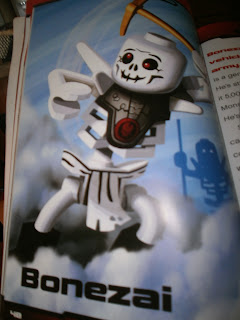 I also made white chocolate covered pretzels to represent the bones of Bonezai from Ninjago.

All in all, this party was one of the simpler parties we have ever done. It was a lot of printing, coloring and thinking outside of the box to put it together. The kids loved it. The ninja birthday party theme was definite when people arrived and our son was so proud of it all. Our mission was accomplished.

If you don’t have a lot of time to make your own decorations, I found some great options online:

I hope some of these ideas help with your Ninja birthday party! If you liked this Ninja Birthday Party post, make sure to check out these other creative posts for your kiddos: